21 Common Grammar and Spelling Mistakes to Avoid in 2022, Part 2 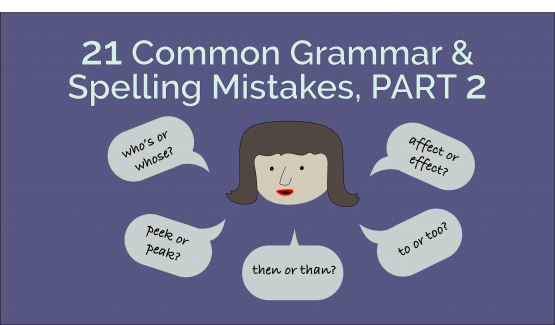 Just in time for National Grammar Day (today!), here is Part 2 of our 21 Common Grammar and Spelling Mistakes to Avoid in 2022 series. Who’s ready? Or should it be “Whose ready”? Let’s find out!

11. Who’s/whose
These two get mixed up a lot, but figuring out whether to use who’s or whose is really very simple. “Who’s” is a contraction for “who is” or “who has” and that’s it. If “who is” or “who has” fits the sentence, then use “who’s” but if it doesn’t sound right, use whose. For example, when you want to say, “Whose turn is it?” use whose, because otherwise you’re saying, “Who is turn is it?” and that just sounds silly. But if you’re saying, “Who’s ready for spring?” what you’re saying is “Who is ready for spring”; therefore, “who’s” is correct. So easy!

13. Affect/effect
The basic rule is that “effect” is almost always a noun and “affect” is almost always a verb. So if you say, “The long-term effect of exercise is being physically fit” then “effect” is correct because it serves as a noun. But if you say, “The storm in Texas affected many people,” then “affect” is correct because it’s working as a verb. Think of affect as the action and effect as the result. The difficulty comes in when they switch jobs. Effect can sometimes act as a verb, and affect can sometimes act as a noun, as in “We must effect change,” in this case “effect” is a verb meaning “to bring into being.” And affect can function as a noun meaning “feeling” or “emotion,” among a few other uses, as in, “The patient is showing positive affect.” Good luck out there!

14. Me/myself
Some people think that saying “myself” is the correct way to identify themselves in a sentence, as in, “Jane and myself worked on the project.” Don’t do it! Use a personal pronoun when you’re referring to yourself (me or I). “Jane and I worked on the project.” Myself is a reflexive pronoun, which is used when the object of a sentence is also the subject, as in, “I hurt myself,” or when you want to emphasize how cool you are—“I myself fixed the leak.” Bottom line: It’s almost always best to stick with “me” (or “I”).

15. Then/than
Then is an adverb that, per Merriam Webster’s, means soon after; next in order; or following, as in, “I’m going to the store then I’m going home.” Than is a conjunction used to compare or contrast something, as in, “My new car is nicer than my old car.” So unless you are comparing or contrasting something, you probably want to use “then.”

16. Peek/peak
Peek and peak are often confused, but no more! Peek is a verb meaning to look furtively at something, as in “I peeked through the crack in the door to see if my boss was in her office.” Peak is a noun meaning a sharp end or the highest level, as in, “With this promotion, I’m at the peak of my career.”

17. To/too
To is a preposition and it’s used as a function word. It helps direct the words surrounding it, as in, “I want to eat that cupcake,” and “You’re welcome to have one.” Too is an adverb that, per Merriam Webster’s, means also; besides; or to an excessive degree, as in, “These cupcakes have too much frosting, and they were kind of expensive, too.”

18. Seperately/separately
This word is often misspelled probably because it sounds more like “per” than “par” when we say it. But the correct spelling is separately. Just don’t start pronouncing it funny. ?

19. For all intents and purposes
I first heard this term when I was much younger and working at a law firm. I was transcribing a letter and it sounded to me like the person said, “For all intensive purposes” so that’s what I typed. I assumed it was a legal term. What purposes were so intense? I didn’t know. Well, I was corrected (as well as laughed at) and never made that mistake again. For all intents and purposes is defined by Merriam Webster’s as a way of saying “one thing has the same effect or result as something else.”

20. Uncharted/unchartered
We’ve all heard someone say, “We’re going into unchartered territory!” And it sounds correct. But charter is defined by Merriam Webster’s as a written instrument; a lease; a special privilege. So it doesn’t make sense for this use. The correct term is uncharted territory, meaning there is no map or chart for this place to which you are going.

21. Moot/mute
It’s not a mute point! Mute means unable to speak. Moot in the way it’s used in this sentence means “deprived of practical significance,” per Merriam-Webster’s.

Well, there you have it, 11 more ways to improve your writing in 2022! I hope you enjoyed this series. Let us know in the comments what other grammar and spelling mistakes you’ve seen, and we can cover those in an upcoming blog post.

Remember that correct grammar and spelling is critical for effective communications with your target audiences. If you need help avoiding costly mistakes, contact us for a proofreading price quote.

By Sue McGrath. Sue is a writer, editor, and proofreader at Bullseye Communications.